The Service Agreement (hereinafter referred to as “the Agreement”) is signed by you and Wuhu Jiahong. It includes (but not limited to) Wuhu Jiahong Privacy Policy and other contents. In case of change, Wuhu Jiahong will announce by means of the licensed software sending a message without further notification. Upon the announcement, the changed agreement and rules become a part of the Agreement automatically, without further notification to you for your consent. In case of objection to such relevant changes, stop use Wuhu Jiahong’s service; if you keep using it, it will be deemed as that you hold no objections against the changed rules and agree to abide by them.

1.2 Services refer to services provided for you by Wuhu Jiahong and its suppliers. You can use such services on the mobile terminal with the licensed software.

3.1 Wuhu Jiahong grants you the right to use the product based on this software.

3.2 You are prohibited to license, sell, lease, transfer, issue the product in any form, or use the product for another commercial purpose. 3.2 Due to limitations on software adaptation platforms and terminals, you can only use the licensed software in the authorized system platform and terminal; if you install the licensed software on other terminal equipment, it may damage your hardware or software function.

3.6 You shall properly keep your account number and password. In case of any safety loophole for your account (including but not limited to divulgence of user password), you shall notify Wuhu Jiahong in time, and Wuhu Jiahong will assist you in taking relevant measures. Otherwise, all behaviors related to your account shall be assumed by you and you will bear all responsibilities.

4.1 You acknowledge that certain service of Wuhu Jiahong and its suppliers is based on software or services provided by a third party. Such service is set to facilitate your application and necessary legal authorization is obtained from the third party.

4.3 You acknowledge that Wuhu Jiahong and its suppliers cannot guarantee that the licensed software always uses or contains such services, or that other software provided by the same third party will be used in future. Likewise, it may use similar services supplied by another third party. Upon application, the aforesaid corresponding software or services are subject to this Agreement.

5.1 You shall use the licensed software in a normal manner. The following ways are in breach of the application standard:

2) Collect information or data of other users without authorization, for example, email address and the like;

3) Maliciously use the product in an automatic way, causing overload to the server, or interfere with or damage web server and network links in other forms.

4) Attempt to visit server data or communication data of the product without authorization;

5) Interfere with or damage the production application by other users.

5.2 You understand and agree that:

1) Wuhu Jiahong will determine whether or not you are involved in a violation of standards above, and suspend or terminate your application license according to determination results or take other restrictions according to agreements.

2) Wuhu Jiahong will directly delete information in breach of laws, or infringing others’ legal rights, or in breach of the Agreement issued by you when using the licensed software.

3) If a third party suffers from damage due to your breach of application standards, you shall independently bear legal responsibility in your name, and protect and indemnify Wuhu Jiahong from losses or additional expenses generated therefrom. Otherwise, Wuhu Jiahong has the right to claim compensation.

6.1 You promise that you will not conduct any act in breach of laws or improper behaviors by using the service, such act and behavior include (but not limited to):

6.1.1 Uploading, transferring or sharing information containing one of the following contents:

1) Opposing the basic principles determined in the Constitution;

5) Destroying religious policy of the state and advocating heresy and feudalistic superstition;

8) Insulting or slandering others and infringing on the legal rights and interests of others;

10) Containing other contents restricted or forbidden by applicable laws, regulations, rules, provisions and other legal standards.

8.1 Unless otherwise specified in-laws and regulations, Wuhu Jiahong will do its best to ensure the security, validity, accuracy, and reliability of the licensed software and technologies and information involved, but Wuhu Jiahong is unable to guarantee the same due to restriction by available technologies nowadays.
8.2 You understand that Wuhu Jiahong will not assume responsibility for direct or indirect losses caused by force majeure and default of a third party.
8.3 You shall be responsible for personnel injury or incidental or indirectly injury caused by or related to one of the following accidents: 1) A third party uses the licensed software or changes your data without permission; 2) Expenses and losses produced by using the licensed software; 3) Your misunderstanding of the licensed software; 4) Other losses related to licensed software caused by reasons not attributable to Wuhu Jiahong.
8.4 Any other licensed software-derived software not developed and released by Wuhu Jiahong or the development and release are not granted by Wuhu Jiahong is illegal software. Downloading, installing and using such software may cause unpredictable risks. Wuhu Jiahong shall be free from legal responsibilities and disputes generated therein and Wuhu Jiahong shall have the right to suspend or terminate application license and/or other all services.
8.5 You have been informed that the usage of Wuhu Jiahong and its supplier’s smart platform involves in Internet service, which may be affected by unstable factors in all links. Although Wuhu Jiahong has taken safeguard measures, the service may be suspended, terminated, delayed, suffered from application restriction or application failure due to inherent defects of Internet and e-communication as well as factors beyond reasonable control of any party to the Agreement (including but not limited to fire, flood, terrorist attack, pestilence, natural disasters, riot, terminal virus, hacker attack, network fault, and terminal fault). You hereby agree to bear the foregoing risks and agree that Wuhu Jiahong is free from any responsibility when normal running of services is influenced by the occurrence of foregoing risks.

9.1 You should understand that you shall use the licensed software according to authorization scope, respect the intellectual property of software and contents contained in the software, and perform obligations according to the Agreement when using Wuhu Jiahong’s services. Wuhu Jiahong will terminate the application license if you are in material breach of the Agreement.

9.3 In case of your breach of the Agreement or other agreements signed with Wuhu Jiahong, Wuhu Jiahong, and its suppliers shall have the right to notify the related companies, requiring them to take restrictive measures to your rights and interests, including requiring related companies to suspend or terminate supplying part or whole services for you, and legally announce your breach of agreement on websites run or actually controlled by them.

9.4 The licensed software is downloaded from the downloading platform and you shall abide by stipulations of the download platform, system platform and terminal manufacture on application ways and restrictions of the licensed software. If the above mentioned third party confirms that you are in breach of the agreement and Wuhu Jiahong and its supplier’s treatment is required, Wuhu Jiahong may terminate your application license at the third party’s request.

9.5 When the application license terminates, you shall stop using the licensed software and destroy all copies.

9.6 You must bear all compensation responsibilities if Wuhu Jiahong and other users suffer from losses caused by your breach of terms in the Agreement.

10.1 Effectiveness, explanation, change, execution and dispute settlement of the Agreement are subject to laws of the People’s Republic of China. If no relevant laws and regulations are available, the reference to generally international business practices and (or) industrial practices shall be made.

10.2 Dispute arising from or in connection with the Agreement may be settled by you and Wuhu Jiahong through friendly negotiation or submitted to People’s Court of Wanli Industrial Park, Jiujiang District, Wuhu City, Anhui Province, China where the Agreement is signed for adjudication.

10.3 When any term of the Agreement is judged to be invalid by the People’s Court, it will not influence the effectiveness of other terms or any part thereof, and you and Wuhu Jiahong shall perform the valid terms in good faith. 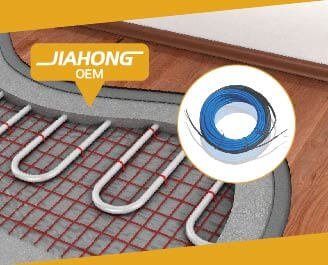 Heating Cables Manufacturer
As No.1 manufacturer and exporter in Asia-Pacific, Jiahong has 25 years rich experience to support your business on both Self-regulating Heating Cables and Constant Wattage Heating Cables.
Let Jiahong Suport You
Special Request Heating Cable
You can customize the heating cables according to your requests. Both ODM and OEM ways are available.
[widgets_on_pages id="Quick Quote"]
Scroll to Top
Send Your Inquiry Now